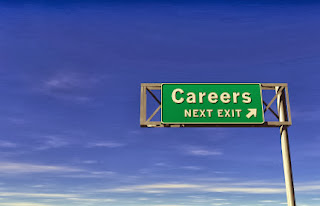 UK workers are less happy that their EU counterparts according to a report published last week by recruitment agency, Randstad.  They found that only two thirds of the UK employees in the study would describe themselves as "fulfilled".  A bit of statistical jiggery pokery and we see the stark headline that 9.9 million people in the UK are unsatisfied with their jobs.

That's a really large number of people who are not enjoying a massive proportion of their waking (and sometimes sleeping) hours.

My guess is, when faced with the question "How fulfilled are you at work?" the internal thought processes of the dissatisfied participants followed one of three paths:


What I'm really curious about is what happened next.  Did they just finish the questionnaire and carry on doing the same stuff or did they do something about it? And if the latter, what?

I know that change can be scary. We are brilliant at legitimatizing our dissatisfaction "It's work, I've just got to get on with it" or finding reasons NOT to change "My family relies on me".
I also know that when people do something to address how they feel they wonder why they didn't do it sooner.

So, if you count yourself as one of the 9.9 million, here are some questions for you:
If those questions were easy, maybe you've already started to change something.  If they made you uneasy or you tucked them away in the box marked "Too difficult", let's talk.

Posted by Stephanie Smith Coaching at 11:13 No comments: