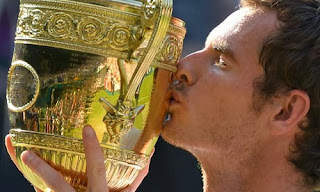 I still smile when I see this picture of Andy Murray, holding aloft the coveted Wimbledon trophy.  Not just because it was an exciting moment for everyone in Britain (particularly those, like me, with more than a hint of Scottish blood) but because it captures that moment when he realises that his dream has become reality.

Murray began working with Alexis Castorri in early 2012 and she came with the personal recommendation of his coach and mentor, Ivan Lendl.  Her approach is simple “I’m interested in helping a person become the best they can be," she told The Daily Telegraph last year. “That means talking about their lives in total. Tennis is part of it but not the whole of the conversation.”

Together, they identified that his exceptionally high standards were creating massive internal frustration.  Her work with Murray helped him re-connect with the passionate teenager who played with excitement and intuition.  They then brought that together with all the positive experience he had gained over the years - his tactical brilliance and creativity.  Oh, and the fact that he is pretty good at hitting a ball over the net.

You have to work on your WHOLE self to be truly successful. Having a goal is a good start. Having talent gets you so far.  Having ambition can get you further.  All those elements got Andy Murray to a good few Grand Slam finals.

It is quite common for highly ambitious people to be exceptionally self-critical.  In my view, it's how they work with (rather than ignore) that self-criticism that makes the difference.  So, before you sign up for more training, re-write your cv or start a new project, take a moment to ask yourself some of those questions you've been avoiding.  For instance, what is your "Wimbledon Championship"?

Posted by Stephanie Smith Coaching at 02:49 No comments: